It's always a pleasure to feature visual artists who are truly passionate about what they do. From the Valley of California, Kido is a young artist whose sketches and detailed character portraits rise and come to life. He has the skill and talent to tell a story about an individual figure he creates and builds. From black and white illustrations to minimal use in pastel colors, this authentic artist has recently done illustrations for Mark Redito's Likido event series and a collaboration with 2ToneDisco titled, Amity. Displaying emotions of the world's youth, Kido portrays his own personality and thoughts through his visual outlet which resonates with others extremely well. What caught my eye about Kido was that not only can you relate to his characters, but it gives you an itch to want to know the character in a "real life" setting. He plays with various wordings and fonts paired with fine sunken personalities to give an entire piece that displays Kido's honest and daring style. Below I had the chance to ask Kido all about how he started and where his inspiration and love for what he does derives from! Enjoy!

Question 1: What got you into making art?

Well, I think I got into drawing because I had a really strong and violent imagination when I was really young, more specifically during Pre-School. It was really when I started watching action movies that got me drawing stick figures fighting each other; then eventually grotesque monsters based on prehistoric creatures, creating my own solar systems, and characters that fight in wars. Crazy and really weird shit basically.

I didn't really grasp the ideals of "actual art" until the end of my middle school years; before all of that, anime and video games is what I would draw almost all the time. It was when I was introduced to contemporary artists such as Roy Lichtenstein and Keith Haring that really changed my view about illustrating. Then what actually pushed me into going beyond fan-art or referenced drawings was the internet. At this time, I just entered high school and the first few artists I had discovered, such as OMOCAT and Nimura Daisuke, inspired me to create images that were aesthetically pleasing, something with backbone, and elements of design. It made me want to improve stylistically, and form attractive images. REALLY TERRIBLE OLD STUFF:

Question 2: What people intrigue or inspire you to pursue visual art?

The people that really inspired me initially were other contemporary artists I had discovered on the internet (such as OMOCAT and Hellen Jo). But as I started to develop myself a bit more I realized that I was borrowing too much of elements from other current visual artists instead of creating my own. So I delved deep into art, history, and discovered artists like Francisco Goya, Caravaggio, and the more recent Moebius and H.R. Geiger; these are a few of many visual artists that helped formed my sense of image or "aesthetic."
When it comes to feeling inspiration, I tend to lean towards other art forms such as music. With music, my taste tends to vary according to my mood as it does with illustrating;

to a more upbeat selection,

to the more experimental ear candy,

There are so many more people who inspire me on a daily basis but the list would go on forever.


Question 3: How would you define your style of artwork?

I'm not so sure on how to define my style of artwork other than that it is me just drawing what I feel like drawing; whether it be an image in my head that I want to see or an emotion that I want to manifest into a certain composition. I tend to lean towards design oriented illustration, and split my mediums typically using ink and pencil. I would sometimes use digital to enhance some work by adding borders and lighten or darken features, etc. but typically my work is based on traditional works. 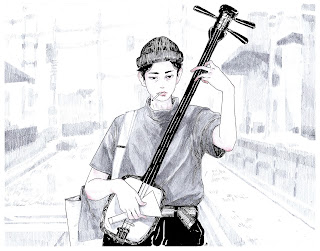 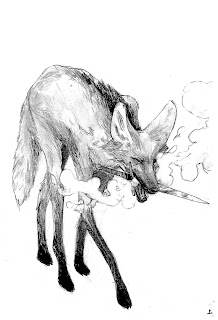 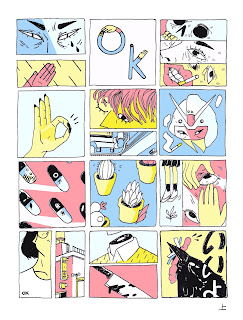 Question 4: What do you hope someone will gain/feel out of seeing the illustrations you create?

I hope that people feel something, anything, whether it's an emotion, or something from their imagination, when they look at my illustrations. I just don't want it to simply be a "cool picture to look at," although that's something I keep in mind when drawing. I would like to maybe spark the same kind of inspiration that artists I had mentioned earlier incited within me a few years ago when I wanted to get better. That would be pretty rad.


Question 5: What is your favorite piece you have created so far?

Hmmmm... This is a tough question because I tend to not really like what I make right after I make it, so making a decision on ONE absolute favorite is difficult. But the first thing that comes into my mind, in terms of the piece, I am most happy with is this one called Hide // Hidden : 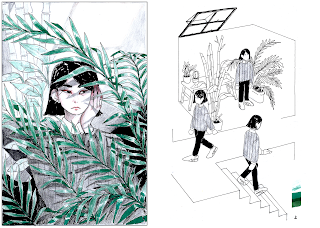 Question 6: How far do you plan on taking your art? Any future plans or goals you want to achieve?

I would love to go really far with my own work and I hope to accomplish something to help the growing number of visual artists online. Almost everything I do only gets to the internet, so one of the things I would love to have is something more tangible and a place where other visual artists can have their art be more tangible too. I'm planning that someday I could create a venue where visual art, like that are from artists online, meets music. A central place where people, who are passionate about their crafts, who are like-minded or even different-minded, can meet and socialize. Kind of like a gateway from URL to IRL. That is one of my biggest dreams...

But for now, a huge goal of mine is to be able to do what I love while being well off, and hopefully not end up broke and homeless. (lmao)