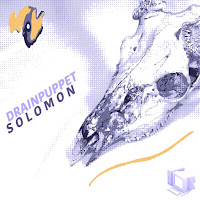 Drainpuppet obtains a sound unlike any other. Always trying to branch out, this unique producer constructed a new track titled, "Solomon," that brings out the peculiar music style she offers. Via Deskpop music label, Drainpuppet's new track makes you sway back and forth, almost as if the song where transporting your mind to her dimension of musical imagination. Drainpuppet's style of music is boundary pushing and experimental in all elements of the electronic music spectrum. Not only is "Solomon" a solid track but it's also the perfect initial release to derive from her upcoming EP, Firewater! Below check out the Q&A I had with Drainpuppet, talking all about the new single and upcoming EP! Enjoy!

Also, check out the mind bending music video for "Solomon"!

What was the inspiration behind your new track “Solomon”?

The entire idea behind Solomon was basically me trying to do something weird and push myself. If you listen to my other music, some of the sound design is pretty safe. I have a lot of songs made almost entirely out of supersaws. Not that that's a bad thing, I just want to get out of my comfort zone. I'm losing interest in basic subtractive sounds and I'm trying to opt for the wild re-sampley frequency modulation stuff whenever possible. Genre wise there's this style I've been pursuing a lot lately that's like. Emotional kinda-trap-not-really without 808s. Some people call it future beats but I'm not sure that actually means anything lmao. Solomon has a little bit of that but with a lot more weird. It's very similar to my track Soy Milk that got copyright struck earlier this year.

Why is “Solomon” your first release from the EP, Firewater?

It actually isn't! Though it would appear that way haha. Riverwater, Icewater, and DDE are all songs that I've released prior to this one that are appearing on the EP. The thing is, originally Firewater was going to be two EPs. Fire and Water. In the end, the tracks that were going to be on either didn't cohere as strictly as I wanted to, so I arranged them in more of a gradient and put them together. Braz and I were trying to decide between three tracks. Solomon, Pseudogenetic, and Deception. These three are all pretty weird. But Solomon has a lot of out-there sound design that's really congruent with Deskpop's musical aesthetic, not to mention that it's the shortest cut on the EP. Fit really well as a promo single. I almost ended up going with Deception because it keeps getting stuck in my head, but this track is really well received so far so I'm glad I went with it.

What inspired you during the production of Firewater?

That's kind of tough. I guess a lot of it is really inspired by like, everything I listen to. Moreso than most of the stuff I make. That breakbeat track started as me trying to make something like ghost town DJs. The outro is in 7/8, I have a friend of mine who goes by HouseBreaker, and a lot of their stuff is in 7/8 and 5/4 and so I think their music, plus all the math metal I listen to have influenced me to make a really hype irregular track once in a while. There's like a club track on there too. It's my most varied project by far, or at least has the most variety-per-track haha.

What can we expect from the upcoming EP? Any collabs or is it just merely all your own production? What direction do you hope this EP will give to your music career?

In a way, I feel like Firewater is picking up where I left off in spring 2014. From when I first started releasing music until then, my stuff always had a much muted, introspective sound to it. My track "Breathe Into Me" from ADHD is a good example of this. It's like train ride music. Then that summer I did a complete 180 and started trying to make big EDM stuff but I wasn't quite hitting the mark. Since then I've been gradually trying to get back to my roots. Now Firewater is in no way sleepy, but it definitely harkens to the level of emotion that my work last year lacked. I have a lot of friends who have been telling me they miss my old sound, the sound of my introspective stuff. This EP... definitely isn't that, but I think it strikes a chord that's going to make people go like "This isn't what I expecting from her but I love it anyway." You know? No collabs! The whole EP is instrumental and I don't really like collabing on instrumental work. I'm very neurotic about mixing and project organization so working with other producers usually really bothers me haha. Yeah it's all my production though, very little external feedback either. It was very much just me holing up in a cave trying to hammer out something I'm proud of. But I'm really just hoping this release puts my name on the map. It's been kinda hard to reach new people because stylistically I'm in a place that's like, EDM labels don't want me but not-EDM labels don't really either. So hopefully this will make people go like "Whoa, where did they come from, this is dope."