"HEIR TO THE SUGAR HONEY QUEEN" 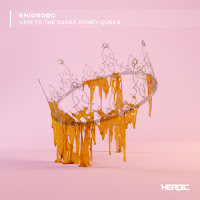 If the title of this song isn't sweet enough, Ehiorobo will glide his voice into your soul with his track "Heir to the Sugar Honey Queen." Being a re-mastered release, via Heroic Recordings, the light keyboard notes, catchy drums, various samples of popping noises scattered in place, and narrative lyrics about finding love, this stunning artist is someone who you do not want to sleep on. His style is truly eclectic and undefinable. Below I had the chance to ask Ehiorobo about his fresh song, "Heir to the Sugar Honey Queen." Enjoy!


Check out and download Ehiorobo's "Heir to the Sugar Honey Queen" here!

What was the inspiration behind the track, "Heir to The Sugar Honey Queen"?
When I wrote Heir, I was around 18 or 19, and coming off a few romantic situations. Instead of plucking apart intricacies, I wanted to capture the general feeling of infatuation, or at least how it feels to me.
How about when it came to the lyrics?
Honestly when it comes to lyrics, I try not to think too much, and just do what feels right. There are a bunch of different ways to maneuver around a song vocally, but if what you're doing feels right to you, then you're doing the right thing.
The lyrics in "Heir" definitely feel like syrupy infatuation to me. Words that feel very pink and purple to match the soundscape.
Since this song, you have dropped multiple tracks on your SoundCloud. How does this track differ from the others?
The process of making this one is definitely worlds away from most other tracks I work on. I had a working version fully produced, and then my computer crashed midway into working on my album in early 2014. I re-made a new version after giving myself enough time to be all pouty-faced, and what I came out with felt incredibly worth the overcome computer wonkiness.
What do you want listeners to feel or take away when listening to "Heir to The Sugar Honey Queen"?
"Heir" reminds me of the feeling I get when I wanna hold something close, and I think that's a super instinctual feeling in humans. I think I want people to enjoy that feeling as much as possible, however they see fit.