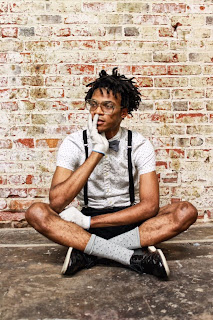 Omniboi comes from a home in Arizona and he's been making music for almost his whole life! The way he interprets the keyboard in his music and DJ sets really makes his style very unique. Even more beautiful, in lots of the music he produces, he uses this spectacular instrument in some kind of way, shape, or form. One of his fairly recent songs, “Twinkle Twinkle Bang,” (off of Paper Crane Volume 3) premiered through Nest HQ will really show you how much his music really flourishes. Omniboi does not only make beautiful songs that give you a cutesy feel, but also creates tracks and mixes that'll make the club go wild, like his remix of “Thong Song” by Sisqo. Omniboi is also a part of the group known as 2ToneDisco where him and James (The founder of 2ToneDisco) DJ back to back and also produce music! Below, check out the interview with Omniboi and be sure to definitely check out all his music because it is all amazing pieces of art made from the heart.

We had one of those cheap Casio keyboards around the house when I was a kid and I would just mess around on it, teaching myself songs that I'd heard in the videogames I would play. That eventually led to making my own original tunes.


Question 2: What people intrigue you or inspire you to pursue music?

I got into music because I was inspired by a lot of videogame music composers like Nobuo Uematsu (Final Fantasy) and Dave Wise (Donkey Kong) who were making really interesting and varied sounds with computers. Also a lot of my work is inspired by the visuals in Studio Ghibli films.

I'd say it's definitely electro Pop in nature, but it borrows a lot of aspects from jazz, chiptune, disco, and classical. I call it "Shop Pop".

Visuals. Things like drum patterns or rhythms are inspired by other artists I know and listen to, but the overall soundscape is something I create from visual stimuli I get from taking walks around LA or watching movies.

"Immortal". It's on the Tall Tales collection I did and was a dirge for my grandmother who passed away earlier this year. It's not my most insane or complex piece of work, but it's the only piece whose finished product was EXACTLY how I was hearing it in my head.

Question 6: How far do you plan to take your music, any goals? Who would you like to work with in the future?