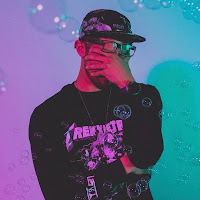 Are you ready to rave or are you ready to rave? You could describe Californian producer's, Foxsky, music as ambitious rave but in the end, that's not what it is. It's made up of the inspiration from the underground club scene and the journey of finding true self-expression. The colors and energy made by this out of the box artist are some of the most intriguing and amplifying creations you might ever encounter. Inspired by the various musical factors he surrounds himself with, tracks released from major music labels like Mad Decent, Main Course, or just simply his numerous bootlegs and remixes, are each wrapped in chaos and dynamic noise. After just completing his Japan tour, accompanied by TREKKIE TRAX, we were visually presented with a wild single and music video titled, "Stingray." Showing his adventures in the country that geographically and socially inspires its visitors, Foxsky is slowly taking over new territory around the world! Below check out our interview with the thrilling Foxsky to take a minute to know more about his music and what inspires him! Enjoy!

I got into music growing up when I taught myself how to play the guitar and learned how to record and produce my own instrument recordings into rock music. Eventually, I discovered different kinds of dance music, and online 8-bit collectives, and wrote a ton of fakebit/chip-break stuff until I got hooked on trying to push myself to discover new ideas with sound design and composing music - and now here we are years later!

There are really so many sources of influence, it's hard to say. Donkey Kong Country 2, Stephen King, The Fall of Troy, Diplo, Munchi, my Japanese and Middle Eastern heritage, Hiromi, Nobuo Uematsu.. the list goes on. I've been obsessed with growing as a musician and getting in touch with my self-expression for as long as I can remember. I think as of late, my journey and search for my self-identity as a musician and human has inspired me the most to experiment with the sounds I write.

In one word, perhaps "aggressive." I like music that aggressively addresses emotions, or is aggressively emotionless club music, or is aggressively melodic and hyperactive. But, it's really hard for me to put myself in a neat box with labels and I think that comes across pretty clearly when you hear any of my music. I like doing whatever I want, whenever I want.

I think I'm the proudest of my "My Friend the Yellowtail" release. Writing that song was a big challenge for me personally and musically, and was a transitional moment for me as a producer. It was an identifiable moment in my life as a musician where I feel I channeled my personal identity and feelings into a mp3 in a totally genuine way, at the risk of alienating most of my followers who generally are into heavier club music. Being a self-released song with no initial label support, the response was overwhelming. Having musicians and DJ's I really looked up to but never got in touch with reach out to me to support it was incredible, and it eventually also led to a full remix EP release on Trekkie Trax, which has since become some of the best friends I've ever made in music and my life.

My only REAL goal is to keep trying to find ways to write better music! I want to grow as an artist and learn how to better channel my creative energy into things that feel right. I'd love to return to Japan for another tour and travel more in general to meet more great people who can offer me better understandings of the world around me. As for specific people I'd like to work with, send me Danny Brown, Rihanna, Sophie, Munchi, and Cashy Cat  to name just a few...