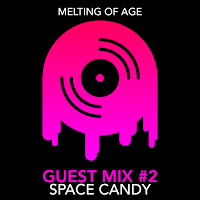 For Guest Mix #2, we are all in for a real treat from UK artist, Space Candy. Taking us on a wild trip around the world, Space Candy selects tunes that tell a tasty colorful story about adventure and exploration. This 27-minute mix is the perfect way to continue your summer vacation and opens a doorway to discover new music from Space Candy and more!
Below take a listen to Space Candy's guest mix and follow along to its intergalactic storyline titled, "Road Trip Thru A Themed World!" Enjoy!

king of the beach ≈
You're with friends, in your dune buddy, use just entered the park, and the road is smooth, the times are good, you still have like all your gogurts left. You are all feeling good af !!!

Sunset is happening, and the road ahead is one straight strip. You're in something resembling a desert, except the sand is changing colour, the sky is filled with clouds shaped like stories, it's kinda scary yet fascinating af, but this is just the beginning !!! save ur gogurts !!

After the initial chaos of the sand and cloud shapes, you start to embrace it. They are telling nice stories although your noticing very small stone golems are hanging out in your buggy now. Your friends are chilling w them, and they even brought more gogurts so it's all good !! They taste kinda strange tho . . .

Wtfffff the road is spinning or sleeping or doing something that's like the equivalent of a person trying to drink a gogourt and program a complex UFO algorithm. You do your best to keep on track as it begins to rain sheets of melted glass goo, making the terrain more slippery than a rhino on an ice rink trying to win world series ice hockey (while eating a gogurt).

Suddenly you are plunged into darkness like that one scene in Spy Kids 3D !! There are tiny flashing spheres, but at least your sweet af dune buggy can fly now. There are tiny flying dragonflies reciting poetry to you although they speak so fast and high pitched, you can’t tell what they are saying. Also, you would have trouble understanding them even without their speech speed as you're trying to not fly into the spheres !! Gotta protect those gogurts !!

You are well off the path by now, there is no visible way to go, and you are just floating around, letting the world take you on your way. Neon radiators and trees made of rave KANDI and slime are falling around you. You drink another gogurt and wonder how this is even possible . . . !  !! ! !

You finally reach the ground and find yourself in a forest, where the trees mentioned above are numerous, and the road is narrow. Thank god you're driving a beach buggy suited to off-road terrain and not like a smart car or a Tesla or something. Yes you still have the gogurts, don’t worry about them they are FINE okay, why are you so obsessed with them anyway.

Ahhhhh nice, a clearing has emerged in front of you. Free of the dense jungle, you find yourself driving on a glass (haha do you get it) road in an abandoned futuristic city. The buildings are a bright blue colour, like the Gatorade. Despite the amazing technology and architecture around you, there is no-one else to be found aside from you, your friends and your gogurts, so you drive hella fast and enjoy yourself after the jungly, slime coated ordeal you just went through.

Okay, shits getting real again cause the sky has turned an electric black and its raining kNIVES !!!! :O You put up your knife proof roof and count your lucky stars that you brought a knife roof just a few weeks ago. There are ghosts in the city, and they are coming for you !! You drive fast af as the ghosts come at you with everything they have, are they after your gogurts??? Your friends are doing fine as well lmao. buT yea anyway you thought that was bad and also a threat to your gogurts/friends?? This shit has only just begun !! . . .

You drive into a giant factory, attempting to out maneuver the ghosts and also the knives (you have the knife roof, but they are making a R E A L L Y annoying scraping sound). Driving up some huge conveyor belts, the factory suddenly activates as a chime sounds and the massive contraptions around you activate, it's kinda like that one scene in star wars attack of the clones where they also get stuck in a factory and have to avoid the things. There are lava and spikes and moving parts all around you is this factory sentient???? An axe nearly hits one of your many boxes of gogurts, buT OMFGG GGH JKHFDG ONE IS GONNA HIT U AAAAA !!!!! . . .

But WAIT !! your friends have saved you from a certain attack of the clones style factory style death!! They move the steering wheel in such a way that makes the dune buggy spin around and avoid the axes (why do they have swinging axes in a factory anyway, what do they manufacture here???).
You realize you’ve been leaving your friends out of the narrative a lot during this story and apologize, you’ve been so focused on gogurts, you forgot the true meaning of friendship! Your friends accept the apology and remind you that they have names goddamit and while they are happy that you accepted your faults, you gotta start using their names !!! (their names are blizzard, gl0wuRm, Jimmy Sputnik and Jupiter_69). You apologize again, but remind them that the narrator is technically in control of name use and they all give a cold stare toward me (hahaha uh let's move on with the story rnnnnnnnn). You all focus on riding the road ahead and making it out of the factory safely!
(Also, replace whenever they say “money” in the song with “gogurts”).

You all escape the factory, and once again it is pitch black. Not in a Spy Kids 3D way though, more of an interstellar/space odyssey 2001 way. A vortex of light slowly appears in front of you, its growing brighter and more intense by the second, gradually taking your dune buggy into its clutches! You see images of your own distorted memories and dreams reflected in the lights that surround you. Everything is the speed of light and reality is becoming scarce. Everything is blending together as you and your friends become one with the eternal, never ending brightness. Everything isn’t that ever was, what is is isn’t. Is it over? / ??? /?

Just as you are about to be absorbed by the eternal, internal, and external every nothingness, Jupiter_69 shouts “USE THE GOGURTS!!” and smashes open all the boxes!
“WHAT??? NO!!!,” shouts the eternal nothingness light void, “MY ONE WEAKNESS!!!,” it cries as it starts to collapse under the strength of the gogurts and friendship. The collapse brings the light show to a whole new level as dreams collide with memories collide with other universes, all falling together in a torrent of light energy and 6-dimensional hyper-polygons! Shits wild! You and your friends hold each other and scream as you fall though.
Eventually, you reach the end of the torrent, it wears itself out and ejects you at the park exit. “Wow!” exclaims blizzard, “Let's do that again!”
“You can say that again sport!” says Betty White, who is here now for some reason, but you all kinda love the concept, so you roll with it.
“How about we go home and crack open some cold Capri Suns?” you say.
“YEEEEE,” replies everyone in unison as you all pile back into the dune buggy and head home.