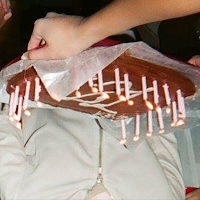 Summer is approaching, and I'd say this new album Little Shadows just dropped is a soundtrack for the season. Titled Twentyone, this East Coast artist contributes pure heartfelt instrumentals with genuine life enduring lyrics. Little Shadows offers us tracks that spell out a hidden message, like "Sad and Dark Rooms - (I[1])," a thrilling melancholy piece and "Clean - (need)," using whispering electric guitar and beautiful echoey vocals that take you away. Being the first album from this moniker, Twentyone obtains a refreshing alternative sound extending a nice twist to what I usually run into. Below check out this wonderful Artist Q&A with Little Shadows all about his new album. Enjoy!

What was the inspiration behind the album?

This entire album is a gigantic emotional tirade where I basically freak out for 40 minutes. It's selfish, spiteful, and upset - which is how I was feeling in the few months that it took me to write it after a very difficult summer. "Twentyone" is a window into a stressful and introspective year of my life, but now I'm 22, so I'm all better.

For this project, what motivated and inspired you to create the lyrics?

In a lot of music that I've made in the past, I usually just wrote some nonsense lyrics that just sounded nice together or told a story of some sort - but they were almost never personal statements or anything about me. All the lyrics on this project are extremely personal to the point of me being really nervous for other people to hear. A lot of my lyrics are ad-libbed or written on the spot just based on what's going through my head at that moment, which at that period of time was quite a bit.

Do you have a favorite track you enjoyed creating the most?

I think "Shoot Me, Baby" is currently my favorite. I was feeling particularly awful one day and just ranted into the microphone after getting this really cool guitar sound going. I started and finished it on the same day, and the idea of a song being a raw thing that went from idea to existence in one sitting makes it all the more authentic in my opinion.

When listening to Twentyone, what do you want listeners to take away from you as an artist?

Hopefully, people will find something to relate to. Or at the very least think that the music sounds cool.