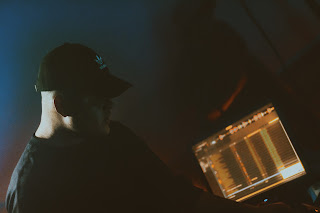 You know the saying, "quality over quantity"? Well, when it comes to music, never more has the phrase been truer when it comes to producer and DJ, Blank's work. From Palm Springs, California, Manny aka Blank expands his style of electronic music to various outcomes of his creativity. Having a reputation for producing unforgettable flips and remixes, when Blank releases a track, he finesses his way to make each one a surging force. Gritty basslines are exposed to dynamic percussion that settles together in an edgy and vibrant groove. You can also find some of Blank's originals residing on Sola compilations; a collective ran by the masterminds of Myrne, Awoltalk, and Enschway. With an ever growing audience and following, this daring producer gifted us a special interview and exclusive mini mix filled with unreleased tunes and inspiring tracks! Check it out below!

There's actually so many things that got me into making music, I was in my middle school's band (Played the sax like a beast shout outs Mrs.Bollard) & that's where I started to get into jazz which lead to hip-hop. Getting into hip-hop introduced me to Youtube, which at the time was on the rise, & that helped with finding an endless amount of music to sort through and listen.
Eventually, I stumbled across some Hardstyle tracks with some friends and instantly got hooked! A few months later we got into chiller stuff, Malaysian house,
Shortly after that, I discovered Avicii & Swedish House Mafia..that was the big turning point for my taste in music.

My good friend Bryant & I saw what DJs were doing with their live sets & just decided to try it as a hobby! We split a whole set-up 50/50 since we were broke freshmen in high school at the time lol...Eventually, we saved up some cash and got our own.
About a year or two into deejaying I realized that I wanted to make the music I was spinning, but my fam was having financial struggles so I could never afford a computer good enough to handle a program.
(mine had enough trouble with a simple DJ program) Fast forward to fall of 2014, I had enough $$$ saved and a lot of research done. Ordered what I needed to get started and got to work.

100 %. People like Diplo & Skrillex have always been major inspirations to me. They have so many successful projects going on at once it that it constantly gets me pumped and makes me want to work more.

NGHTMRE & Slander also inspire me w/ their work ethic, they were some of the first artists I really studied back when I was first learning & seeing their growth along with a passion for the craft pushed me to really pursue music.

On a side note, they're also absolute legends for dropping my "Secrets" flip two weeks in a row on their "Gud Vibrations" radio show!
Virtual Riot is also a big inspiration for me. I think his music is incredible.
My family/friends also inspire me, so great to be around people that believe in me and push me to be great shout outs to all of them for real <3.

Not really sure what my style is.. or if I even have one yet, but I'm definitely versatile. I'm not trying to get boxed in with a certain genre or just make the most popular stuff. I just love making all kinds of music.

Daws are so crazy. You can literally create anything you want. I plan to keep it as open but also as original as possible for the future. That being said, my live performances keep the energy levels high for sure, I'll play anything that gets me moving!

The multiple artists I listen to all play a part when I work on music. A lot of times if something catches my ear I'll try to see how I can give that style my own spin.

This is a tough one. It's between "Mirages" & my "Secrets" flip!

I really want to leave my mark and create as much as I can, while I can. I want to take it as far as it can go & don't plan on stopping anytime soon. Short term I want to continue to grow Blank as a brand that's able to push all sorts of art and creativity.

One of my biggest goals EVER though is playing Coachella haha. Sounds corny or whatever but I'm a Coachella Valley local & ever since I saw Swedish House Mafia play there back in 2012 I knew it was something I wanted to make happen someday.

There are so many people I'd like to work with in the future: Boombox Cartel, Medasin, dylAn, Eptic, Kayzo, Valentine, Graves, Reach, NGHTMRE, Slander, EastGhost, Hex Cougar, Ray Volpe, just to name a few.. the list goes on and on.

(Tracklist for mix in SoundCloud description)