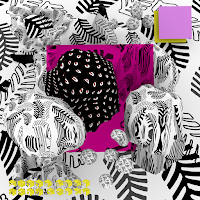 It's just one of those average ordinary days but, today you decide to walk down the side of the city where the art district lies. Few blocks in you stop. You step closer. Your eyes, ears, and mind draw into an obscure wall filled with all sorts of doodles, sketches, and flamboyant drawings. This big orchestra of art can't be labeled, defined, or accurately described, but what you can say is that it all somehow blends beautifully together. This scenario is exactly how you can picture FLOOR BABA's new album NEON DEATH to sound like. Released via DESKPOP, the self-described jazz fusion artist has, what I believe, brought a whole new game and sound to the table. Tracks like "TURN IT UP" and "HIP TO THE GAME," featuring Dtown, revel in the hip-hop sound but deliver a dirty bass infused 90s funk. Compacted with 16 mind blowing tracks, NEON DEATH is a bouquet of sounds that range from soft catchy melodies like "EVERLASTING" and "SPIDER THOUGHTS" to club like rhythms such as "FAKE ONLINE" or "BOLD & BRASH." For a release such as this, get in the thoughts of FLOOR BABA below with our Artist Q&A all about his sophomore album, NEON DEATH! Enjoy!

What was the inspiration behind Neon Death?

It's sort of a culmination of a lot of things, but overall it's about death, as the title hints haha

The death of your ego, the death of one's creative phase of yourself as an artist, even literally dying. And how it's a balance, neon, and death kinda being like a yin and yang. Can't have something forever and something can't end if it didn't begin. Transformation is always happening.

In the meta this is also a reaction -against- a lot of the experiences I've had since my debut GAMEWAVE was well received. I've worked with a lot of people and traveled a lot, had a lot of new experiences. It's not all positive out there. Even at this level in the game, there are people who lie and cheat and mislead others. After seeing too much of that, I've decided to withdraw and do my own thing. This release really captures those feelings. I'm very pleased with how well it ended up as a whole.

Was the creative process in producing this project different than others?

Mmmm yes and no. I approached a lot of the process the same as I usually do but of course with new tricks and skills I've picked up along over the last year and so on. Probably the biggest difference is that this release has much more "soul" and human playing on it. One thing I disliked about the reception of my previous work was that it sounded too video gamey and midi driven so I actively worked to turn away from that. And of course working with other musicians in an actual studio occasionally opened up a lot of ideas I might not have had otherwise.

Can you tell us a bit about the collaborations on the album? How did they begin and what inspired them?

I knew I wanted to get more people involved in this one to help give the release a different element than people expected, and I also know a LOT of local Youngstown artists who are honestly amazing and unknown. Like we are out here, we just lack a "music scene" to make us cohesive. So I wanted to do my part and even for just a few days or a few songs change that.

M DANKS is a very close friend who I've collaborated with for years and years but he just started rapping about four months ago, and I knew I wanted him on this thing. He absolutely brought it on "WHEN IT COMES TO MATH I'M A MINUS."

Dtown is a local rap pillar that I've been listening to since I moved to Ohio. I've been listening to his stuff since before I even made beats, honestly. So I knew that I wanted to get him on something of mine, so I seized the opportunity and invited him to my birthday party at our music studio, and while he was there I got him on a track hahaha we're buds but that's the only time we've legit worked together. It was one of those "I"m really doing this thing" moments for sure. And of course, he brought it like he always does

Do you have a favorite track on the album? If so which one?

I do! I'm very particular to many of the tracks, but ultimately I think "WHEN IT COMES TO MATH I'M A MINUS" ended up my favorite. That raw, bombastic, dark energy is exactly what I was seeking out and helped focus us all on the aesthetic of the work as a whole.