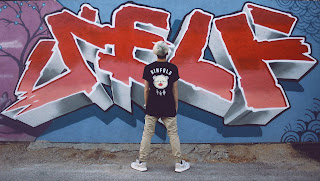 Refreshing is one word to describe this young radiant artist. From San Diego, California, Naisu brings us a SoundCloud filled with gems your ears will undoubtedly enjoy. Some of his outstanding remixes shine bright with originality like his remix of Mura Masa's "Love For That" and Sam Gellaitry's "Waiting so Long." With tracks like "Promise," an earthy trap based song to "Time Away" featuring Dane Amar & Tydpool, a fresh hip-hop track; Naisu is slowly establishing his own unique style of electronic music. His dreamy Japanese inspired Hajimari EP and collaboration EP with Madnap, titled DIVE, show the diversity Naisu's music can offer. Being a member of the Paper Crane Collective, I had the wonderful opportunity to ask Naisu about the inspiration behind his captivating music! Hope you enjoy!


Question 1: What got you into making music?

It all started when I first played Rock Band for PS2 when I was around nine years old. I was awful at it at first, but once I got a feel for it, it was the only thing I wanted to do. That eventually turned into a passion for drumming, which I pursued for a few years. At that time I was the type of person who would much rather be playing video games than live music, so when a friend recommended FL Studio mobile to me, it sounded like a good combination of the two. After fumbling around in FL mobile for a while, I found out there was a PC version, and the rest is history. I'm on Ableton now.

Question 2: What people intrigue you or inspire you to pursue music? (Can be in any field i.e. music, writers, etc.)

My friends are the biggest inspiration to me. Their drive and ability to make their dreams come true is really something I look up to them for. Also, my dad definitely is a huge inspiration. He's been playing in bands since he was younger than I am now. He runs his own studio and record label and has taught me a lot about mixing, mastering, and the related techniques. Shoutouts to dad.

I honestly had a really hard time answering this question, so I outsourced for the answer:
"If there's such thing as smooth electronic. Your music kind of gives me like a combination of Qrion and Nujabes vibes." -Caji

My music is really all about the places I go, the people I meet, and the ways I feel. Each song captures a different place for me. For example "Inu" brings me to outside of the San Diego Convention Center where I shot a music video with Nocturnes, "The Image" with Itto brings me back to the room I stayed in when I visited England, "Wander" brings me to the forest of Lake Tahoe, etc. I hope the feelings embedded into my music shows through.

It'd have to be "The Image." I found out about Itto through a Shiseido commercial called, "High School Girl?" He was the featured rapper in the music for the commercial. I spent hours researching the commercial and the song, and eventually found his page on Soundcloud. After messaging back and forth a bit, he told me he liked the instrumental from my "Mura Masa - Love For That" remix, so I tweaked it around a bit, removed the vocal samples, and sent it over. It was a lot of fun getting to work with him, and I hope we can come up with more tracks to put out in the future!
Question 6: How far do you plan to take your music, any goals? Who would you like to work with in the future?

That's hard to answer, because I have no idea where music is going to take me. Some people quit, or realize it isn't for them, but it's so deeply embedded into me, I don't think I could stop even if I tried. It's a form of expression for me, one that I feel like I can actually communicate through. Music has helped me meet some of the best friends that I have today, and without a doubt will connect me with countless amazing people from all around the world. Good people, good times.