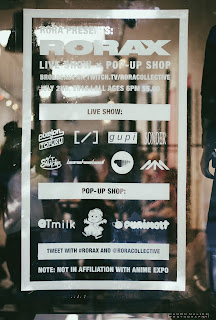 Saturday, July 2nd, was a day we will never forget. Filled with joy and ambition, Rora Collective produced an event unlike, to be honest, any other. With RorAX being our first official event coverage, we did not know what to expect, all we knew was that we had to capture every moment of it. And that's what we did. The energy and ambiance of RorAX was consumed with positivity and the will to make sure everyone had one hell of a time.
Located in downtown Los Angeles, the venue was a hole in the wall pop up spot on the cross streets of Olive and 11th street. Being Rora's first show, this prime location was a good choice. From the pop up art shop to the DJ sets, there was always something and someone for you to experience and interact with. With art provided by QT Milk, punimelt, and Goblin Trash Can, merchandise sold effectively throughout the night, intriguing people to buy unique pieces that you couldn't get anywhere else.
As for the music, the night was opened up by a B2B set by Pixelon and TOFUKU, setting the mood straight up perfect for the night to proceed into excitement. After, Brackets, gupi, and Mitomoro's individual sets killed the crowd with hyped sounds and spontaneous choices in tracks that brought the night to whole other level of tremendous energy. Each of their performances grew faster, stronger, and powerful, until the crowd quickly grew hot and sweaty from the dancing, jumping, and your occasional moshing that took over the floor. Then Sonder preformed a truly inspiring live set by serenading the crowd with original content putting one of the most unique sets of the night. After, W.T. Snacks conquered with his rave inspired set, having an epic vibe and from start to finish. But as the night went on, bansheebeat's set was packed with jubilant and genuine spirit that absorbed the audience's attention and gravitated them more and more to the DJ booth. To close the night of RorAX, dj s0undc10ud, revealed who they were both physically and musically. Dj s0undc10ud's set finished the night with a bang, playing some of the most hyped and rapid tacks of the entire evening. It was something you did not want to miss! RorAX was something you did not want to miss! The overall turnout was inspiring and the diversity of content the Rora Collective team brought together more than impressed everyone both irl and url. If this event taught us one thing, it would be to never miss a Rora event! That night, you could tell, everyone walked away with smiles on their faces and anticipation for what Rora Collective will bring in the future.

Special thanks to Rora Collective for providing us the opportunity and honor to document RorAX 2016 and a chance to interview them for Melting of Age. Below you can check out the full Rora interview featuring Pixelon, Brackets, gupi, and Sonder!

Also, we made a RorAX recap video that we think will embody the event better than words can. We apologize for any withdrawing you may encounter whilst viewing. Enjoy!