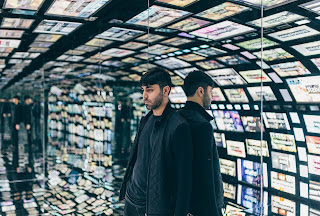 One of the best feelings in the world is when you come across new artists that are able to give their audience a bit of everything they have to offer and Nick AM is a producer who does just that. With the few tracks he has released, via SoundCloud, each one contains a different style of electronic music. From using guitar instrumentals to various house beats, Nick AM is the best of all worlds really! From the state of New York, Nick AM is an artist that is willing to share and present all his musical capabilities. With tracks like "Seconds," a hip-hop club-esque remix of a Ghost Loft song and "Veronica," a dark breathy deep house piece, Nick AM's SoundCloud portfolio is filled with a variety of electronic style music. Below I had the opportunity to ask Nick AM all about his inspirations and music background! Hope you enjoy!

It was actually after I went to the first and only HARD Summer in New York in 2010. I remember coming back and not being able to fall asleep due to sensory overload (I saw a lot of dubstep acts that day). The air conditioner in the apartment I was crashing at kept making noise and the clinking sound started to make a beat in my head that built up and made a nasty drop. I remember thinking it was a pretty cool track in my head, and how cool it would be if other people could hear what I created in my mind. It took me a while to get around to producing though, I didn't think I was capable of it after the first few times I opened up Ableton and got extremely frustrated at why I couldn't just translate my thoughts onto the platform with ease. I tried every few years and then about a year ago I met Hunt for the Breeze and he showed me how simple production could be. With a few lessons and daily practice I've gotten over a few big hurdles. I'm still learning though.

Question 2: What people intrigue you or inspire you to pursue music? (Can be in any field i.e music, writers, etc.)

Diplo. I remember I saw Major Lazer perform for the first time at this massive Hard Presents threw at Terminal 5 in 2009. The lineup was Crookers, Major Lazer, Rusko and Jack Beats. I loved the remix Crookers had done for Kid Cudi which is what had sold me on the event, but I hadn't heard of any of the other artists. I remember when Major Lazer came on, it was really chaotic, and all of these Jamaicans jumping off ladders on stage, and in the middle of it were this poised white dude in a suit with this cool grin, manning the CDJ's like a ringmaster. I was so fascinated with whoever he was and when I got back home I did a bunch of research. I kept following Diplo's story after that. It was really cool to me, this renegade guy who just decided to travel the world to seek foreign sounds and create a culture with them back in the states. It motivated me to meet as many people as I could who were doing music in New York. I started off writing for blogs, then helping promote events, and then eventually decided I needed to do what I had wanted to all along.

Dark beats turn into hypnotic rhythm's that ultimately culminate into an introspective climate.

That’s a broad question. There are certain artists that influence my taste for sure. But I listen to everything and analyze everything from Justin Bieber to Mount Kimbie. I think everybody has their own taste, and taste is the biggest influence of style. A song can inspire me as much as one drum sample. Then there's my emotional climate which factors in. If I'm feeling alone or pensive I come up with the stuff that I usually finish.


Question 5: What is your favorite track that you have produced so far?

Something I haven't put out yet haha. But for what's currently public I'd say my remix of Ghost Loft. I really loved the original and I actually wished I had a clean acapella of it to incorporate his vocals. I had to work with what I had which allowed me to take it in a direction that was different than what I initially had in mind, but one that I'm very happy with.

Question 6: How far do you plan to take your music, any goals? Who would you like to work with in the future?

To the moon and back. Make my stamp in time with my sound, then let it prolong into timelessness. That's the real goal. To create something that withstands the test of time. That being said I'd really like to work with someone from the past rather than the future. I'd love to see what I could make with John Lennon. He was kind of a lost boy growing up and I feel like we could work off each others energy and make something cool. Like "Tomorrow Never Knows" off of "Revolver" has so many intricate textures and achieves this complex depth in its production that’s so interesting for the time that it was made. Beyond that the Beatles just have some of the best song writing ever and if the world were to end tomorrow and the survivors could only choose one thing to listen to for the rest of time, the consensus would probably be the Beatles discography. Or a war would break out.