PROMISE ME IT'S GONNA BE OKAY 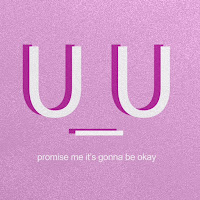 U_U, aka Strider-Kun, is a new sentiment project that will surprise you. Think of your traditional “emo” music brought to a whole different level. With lyrics and electronic instrumentals of self-expression and honesty, U_U uses his own vocals in his tracks like "separate rooms" and "beg you to stay." He even features his other moniker, Strider-Kun, in one of the EP's tracks titled, "miss you," an upbeat characterized collaboration. With promise me it's gonna be okay being U_U's debut EP, we can already get a sense of the music he will be offering to his audience! Not only is his EP in digital format but he also made his creation into a tangible aesthetically pleasing cassette tape, making U_U's EP physically special as well. Below I had the chance to ask Strider-Kun about his new project U_U and the new EP, promise me it's gonna be okay. Enjoy!

Below you can listen to U_U's EP promise me it's gonna be okay and purchase the cassette tape on Bandcamp here!

Why did you decide to start the new project of U_U?

U_U is a deeply personal and emotional project I made after a breakup as a way to cope with the loss and begin the process of healing and renewal.

As you may know, my main moniker for distributing music is Strider-Kun, but once I started writing these songs it became very clear that this was a project that needed its own name, its own theme, and a narrative catered specifically to the project.

U_U became a way to express sadness, which is hard for me to do under my other name.

Who/what inspires U_U's music, especially for the EP promise me it's gonna be okay?

A lot of U_U's inspiration comes from hurt and sadness. Meditating on those feelings to find answers about yourself.

I tried to emulate feelings of being alone when I was writing, especially on the instrumentals. I didn't just want to convey loneliness, but also the feeling of being by yourself, which isn't necessarily a bad feeling. I live in a fairly rural area, so if I want to get completely away from the city I can. I want to recreate that feeling for others to experience.

What inspired you to use your own vocals for the EP? How about the inspiration behind the lyrics?

I wanted to make something personal for people. I feel like almost everything that I've done so far has a very personal touch to it. I hope people can connect with my music on an emotional level while enjoying the sounds that accompany the lyrics.

I also had some help with a couple of fantastic artists, Yung Slav and TAN_KYU. They are amazing and you should follow them.

The lyrics are meditations and reflections on my previous relationship and it’s unraveling. There's a lot I can elaborate on, but I'd rather let the listeners assign their own meanings to the songs. Hopefully they can relate to some of the things I have to say.

When listening to U_U's debut EP, what would you want your listeners to take away from the music?

No matter what you're going through, you're going to be okay. You will make it through. Lean on someone when you need to. I don't know what I would have done without my supportive family, friends, and cat (RIP lil' guy, you were there for me during the worst of it. This EP is dedicated to you most of all).