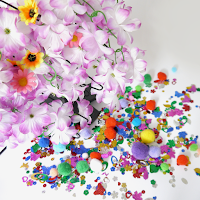 Space Candy's new single, "Elastic Spring," is a fun and quirky listen your ears will enjoy. Being the first single off of the upcoming EP, Forest, via Deskpop, Space Candy collide sounds that pop and snap to give us something original and spontaneous. With snips-bits of spoken vocals and a bubbly rhythm, "Elastic Spring" is just a teaser as to what is to come for the new EP! Below, you can check out what Space Candy had to say in terms of the inspiration behind the unreleased EP and new single! Enjoy!

Also, make sure to tune into the Forest EP Launch Party July 25th at 10pm (UK) on mixlr.com/space_candy!

What inspired you during the process of producing the EP, Forest?
I was inspired by lots of things for this EP! I’ve been working on it for months so what I've been listening to and been influenced by has changed over that time.
I think some constants though have been Tennyson cause they are just musically and production wise, incredible. Amazing train ride music too! I’ve also been really inspired by a lot of artists on Deskpop like FLOOR BABA, Nelward, and Braz_OS. I love the way they have video game elements in their music but they each express those influences in such a unique way and I definitely wanted to try and do my own take on that on some level.
I think another influence as well has been the upcoming NXC community. For a while I forgot how great fast music was and I intentionally sped up some of the songs because they did actually end up sounding better at a faster BPM! Honorable mentions for my influences would be Manu Chao, Jaque(s), PC music/SOPHIE, Alan Resnick, generally just how cool nature is, Siriusmo, Vektroid, Porter Robinson, and a massive massive shoutout to Steven Universe because everything from the art style to the score takes my breath away to be honest.

With Forest being your first ever EP, what impact do you want it to have in terms for you as an artist?
To come clean, I released an EP a year ago called, IRL Alien, on Fright House Records but it was more low-key than this and I hadn't found my feet in terms of sound as much as I have now. For the impact I’d like this EP to have, I think there are a few different messages in there. For example, the art I did for it, I wanted that to be my own take on the 3D rendered art that’s been used a lot recently. I wanted to try and replicate it but using real life objects. So I brought a bunch of plastic flowers, bath letters, glitter, and found an old 90s TV aerial and some other things. I just made some random still life pieces from them! 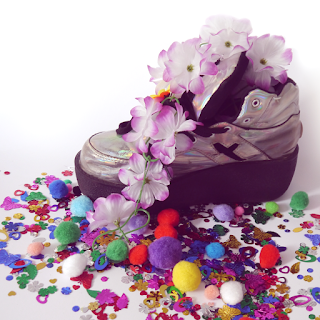 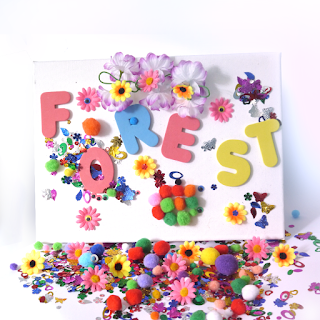 In the actual music I wanted to go with a similar kind of theme where I wanted to blend digital things from all different time periods, everything from modern VSTs to sound fonts to more organic things like field recordings and even a Harp that I helped record. The main kind of aim I had overall for this was that club music can be artistic and artistic stuff can be clubby and just make you feel good! This also partially ties into why I used so much effeminate art and musical elements. People usually don't associate cute things with having any depth or seriousness and I think that’s dumb to be honest. Like why can’t cute effeminate things hold the same kind of emotional weight or meaning as less effeminate things? For example, Aphex Twin, who isn't exactly "masculine" per se, but has kind of aggressive, reflective, cold music that he makes. Then you have an artist like Carly Rae Jepsen who makes bubbly pop music. Both of these artists make incredible, well written music but Carly Rae Jepsen is taken way less seriously as an artist from what I've seen and I disagree with that whole setup so much. They both make you feel things to the same extent; it’s just different ends of the emotional spectrum. I’d really somehow like this EP to kind of  help mess up that binary, so that bubbly, fun art, and music can be held in just as high esteem as sad or cold or "masculine" music and art!

Why did you choose “Elastic Spring” to be the first single to come off of the EP?
I made Elastic Spring like a week before the first single was meant to be released and decided it would be the single on a whim! Like it just felt really right at the time, it isn't the most single friendly track on the EP at all; in fact I think it’s definitely one of the weirder songs on there. I think it just does the best job of showing the full range of what the EP has in store, like it’s a bit clubby, it’s a bit odd but it’s still cute as heck!

How would you describe the EP?
I think I’d describe the EP as being a series of journeys through a sparkling galaxy where real things go down and you’re kind of just floating through and walking around different planets, seeing wild af Lisa Frank-esqe landscapes and meeting these cool aliens. But also you’re reflecting on existential stuff and if you can ever return to your home world, that’s if you even care that, is though because there’s a cool planet made of color changing goo that you can float in all day and it’s really cool! That’s how I'm picturing it right now at least! <3