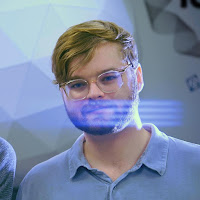 There's nothing like listening to music where an artist's inspiration and creativity bleeds through every aspect and angle of a song. Currently based in New York, ABSRDST's lively and charismatic personality in all the tracks he constructs is what makes his sound attractive to many. Tracks like, his collab with Diveo, "In Case in Crashes" and "Hold Me Squeeze Me" hold glossy synths and gleeful vocals, ABSRDST producing a whole new world for listeners. From doing remixes for Lindsay Lowend and Foxsky to collaborating with Diveo on an auditory project called ICIC, this New Yorker aspires to explore the various opportunities that music and art have to offer.
Below check out the Point of View Interview with ABSRDST and read about his inspirations and start on music! Enjoy.

A friend of mine had a pirated copy of fruity loops when I was in 5th or 6th grade... I just jammed on it a lot when I hung out at his place. Usually, I would make really terrible little songs using the stock library, and my friend would use them to score these super violent cartoons he made using MSPaint and Windows Movie Maker.

There's a list. I grew up listening to Aphex and Boards of Canada and The Knife, but also a lot of hip-hop like Quasimoto, Mobb Deep, and Kanye. Of course, my friends and contemporaries inspire me too.

My biggest inspiration right now is the filmmaker Ryan Trecartin (who I sampled on "Do I Sound Good" along with Ian Isaiah). His films are hard to describe, but he has a way of writing dialog that just makes me really giddy and excited to repeat it.

It's not out yet, but it's called "We Were Alive."

I want to get into making more video content. Working with Diveo on ICIC was tremendous... there's definitely an unexplored visual aspect to my music that I've yet to share. I also want to sing more.

I'm not really itching to work with anyone at the moment. I think given the opportunity it'd be fun to write something with Oneohtrix Point Never or Britney Spears.