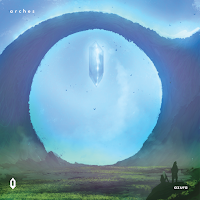 After quite some time, producer AZURA, from Detroit, Michigan, finally released his new awaited EP, Arches. The seven-song compilation resonates light and adventure in every track inviting you to immerse yourself in a world of AZURA. Various tracks, such as, "Oasis," featuring the lovely voice of Zoë Wick, and "Redemption" offer thundering instrumentals and magnetic synths giving AZURA's artistry great excitement for any listener. Below check out the Artist Q&A we had with Azura talking all about his inspiration behind the new EP, Arches! Enjoy.

What was the inspiration for your new EP, Arches?

I definitely was most inspired by places I've visited and the sense of traveling and adventure. That sounds pretty cliché, but it was really specific to one road trip I took with my best friend two years. We drove from Detroit to Zion National Park in Utah, then to Santa Cruz, and San Francisco. We saw all these incredible places and spent most of our nights sleeping in the back of my car. After that, I really committed to music, and the inspiration I got from the trip was the beginning of Arches.

Can you describe the creative process behind the EP? How did the collaboration with Zoe Wick form for the track, “Oasis”?

I hate to say it, but a lot of writing this EP was a pretty dark and extremely difficult process. When I started it, I was pretty much incapable of mixing, so I spent the better part of two years trying to not only write an EP, but to also get my technical abilities up to a professional level. I can't tell you how many frustrating nights I had to try to mix these seven songs, almost all of them have been rewritten at least twice, Arches being the most which I think I did six times. Regarding Zoë, I remember Smoothie Tunes tweeted something about her looking for a producer to work with, and my girlfriend tagged me in it. After that, we started talking, and I sent her a few demos, and she liked "Oasis" the best! It's probably my favorite track on the EP, and I'm so glad she was on it. I've got a remix of her's coming out pretty soon that I've been sitting on for a while so keep your eyes peeled for that.

What would you say the theme throughout Arches is?

I think I already said it a little, but the theme was definitely the sense of adventure and traveling, especially with friends. All my favorite shows from my childhood and now kinda follow the same general idea in that it's a close group of friends traveling the world seeing beautiful places and doing incredible things. Those would obviously Pokémon, Avatar the Last Airbender, Korra (super underrated imo), and Naruto. Those shows, plus my real life travels, were the themes and ideas that I tried to portray most clearly throughout the EP as well as the corresponding art.

What do you hope listeners will feel while listening to your latest project?

That question is interesting to me because as general as it sounds I want people to just form their own memories with these seven tracks. So many of my favorite songs have very personal connections and memories to me because of what was happening or what I was going through when I was listening to them often. If I had to pick some things, I would want people to feel like they are somewhere beautiful, and to appreciate and remember all the incredible moments they've had in their lives. I think I try to induce a lot of nostalgia and longing in my melodies, so I hope people generally feel that as well. Those feelings are super, super important to me.