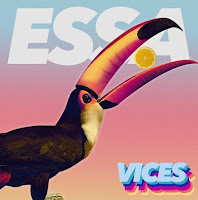 Vices is back with a track that bounces and wonders into a sound that's a bit different than some of their past tracks. You could say at the least that I was immensely excited to see Vices pull up on my SoundCloud feed again. Keeping that signature jersey club sound, the new track titled, "Essa" brings Latin and club flavors that make any listener want to turn up the volume and dance. With an addictive vocal sample on repeat, sweet synths, and bashing drums, Vices are able to prove once again that the creativity in jersey club music is endless!