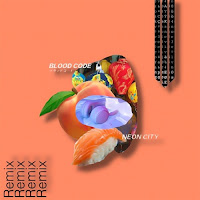 Los Angeles club producer, Slow Graffiti, fires up a new remix that could almost be described as an emotional club track. The glowing original of "Neon City" by Seattle's BLOOD CODE, featuring vocals from moistybreezy, is flipped into a piano ballad inspired version that tunnels sounds of marching drums and shady 808s. This minimalistic track is something we don't usually receive from Slow which makes this remix all the more refreshing. Below share and listen to Slow Graffiti's remix of "Neon City"!