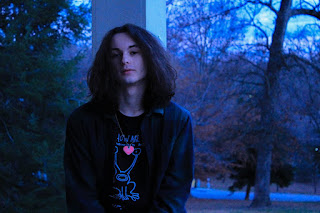 From Atlanta, Georgia, lucid producer, Cavan Brady, is like hidden secret gem in all of SoundCloud's limitless cave. Creating rich and lush ambient/trap influenced tracks like his remix of "Complicated" or his recent collab with girl "Motions," Cavan plays with soft drum patterns and fluid vocals to capture your full attention. A member of LYFU collective and having a rapping side project, TYPE NEGATIVE, the tracks/features he produces all cohesively present his style by dipping his talent into different mediums of music. With low-key projects to arise, keep an eye on Cavan Brady as he will perhaps drop some impressive work this year. Below check out the special guest mix plus interview with Cavan and get to know about him and his music a little more! Enjoy!

Question 1: What got you into making music? How about when it came to getting into rap?

I've always been creative, and I think music was just the logical thing for me to do. I've tried dancing, and visual arts but none of those made me as happy as making music does. I needed a way to get my emotions out and speak for me because as far as rapping I always needed something to get the anger out and it was easier than forming a band haha.

Some of my all time favorite artists that inspire me are Kurt Cobain, Anthony Green, Frank Ocean, Dan Campbell. All of them have written music that has had a huge effect on my life.

I wish I could put a genre on it, but I just make what's in my head. A lot of people have called it a lot of things like "chill" or "trap" or whatever but I generally just write from my heart, and I don't care much about what the genre is. If I had to describe it, it's emotional electronic music with influences from a bunch of genres like post-rock, RnB, Trap, post-hardcore, and pop.

Whenever I make an original song, I write it about something that's happened to me or someone in my life. I'm trying to get more into singing in my own music because I want to be able to tell more through my music than I could instrumentally.

So far my remixes of "Self-Control" by Frank Ocean or "Complicated" by Avril Lavigne are my favorites that I've made. I have a lot of stuff I'm writing I'm way more excited about, though.

Right now I'm working on getting new music out as soon as possible. I'm trying to completely redefine my sound. I'm singing and playing more guitar. It's gonna be really awesome, and I'm super excited about it. I have a few collaborations in the works but nothing I can speak on right now. I just want to keep writing and working on music with my friends and having fun.