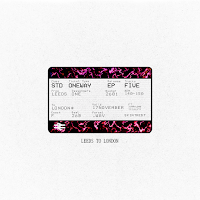 From Leeds, UK, producer Skintrest delivers his debut EP to be one that purely represents his unique and undeniably rich and textured sound. In Leeds to London, Skintrest enveloped the style of London's Grime scene, giving every track a sound that is reminiscent of the rough and reluctant style. Featuring hot collaborations with Leeds rapper, Jimmy Long and Tennessee native IIILLLYYY, the EP embraces his admiration and love for his favorite homeland artists. Below check out the Artist Q&A with Skintrest and get to know about his inspirations and background for his debut EP!

What was the inspiration behind your debut EP?

A lot of the sound design is inspired by producers and artists from London (Chip, JME, Skepta, Wiley mainly), but I also tried to create some unique stuff as well. The artwork is a sort of reference to the cover for Skepta's new album Konnichiwa, which uses a British Royal Mail post stamp with his head replacing the Queen's profile. It is instantly recognizable by anyone from the UK, so I chose to reference the title of the EP in a train ticket that is just as recognizable in the UK as a post stamp.
But, the main inspiration for anything I do is honestly my friends, if I see one of my friends killing it or just making really cool music, then it makes me work harder.

What inspired your EP title LEEDS TO LONDON?

I'm from Leeds, and I love it here, but in terms of electronic music or rap, there hasn't been much other than bad House music going on around here until very recently. So, when I was 9 or 10,  my older cousin (who features on track 4)  showed me this video: https://www.youtube.com/watch?v=qt9tfVyxggU and since then all of my favourite artists have been from London. So, the title is a reference to my taste in music.

For your two collaborations, can you tell us a little bit about how they came together?

INTERNATIONAL -
IIILLLYYY is somebody I met on Twitter through joining LYFU. I was trying to convince him to listen to Grime just after the Sadkey sample pack came out and as a joke, he made a 30 second Grime track using only samples from that pack, but I liked it. So he sent me the stems, and I finished the track. He's from Tennessee hence the title "INTERNATIONAL."

SUPPOSED TO DO -
Jimmy is my older cousin and he's pretty well known in Leeds. I had been asking him for a verse for a while, but I'm not used to producing for vocals or a rapper, so all of the beats I had sent him were too busy or overproduced. So I sent him a really simple beat this month. He sent back a verse, and I made the beat around his vocals. I'll definitely be working with him more in the future.

What do you hope this EP will do for you as an artist?

I started producing in March 2016, between then and now I've made a lot of bad music while trying to find my sound, and I've found it now. This EP is like a milestone. After this EP I want to collaborate as much as possible. The EP is also a demonstration of what I can do because I don't feel like the rest of my music has fully represented me or my potential.

Also, nearly all of my following are based outside of the UK, so they might hear something new in this EP and hopefully it will lead them to more UK music! 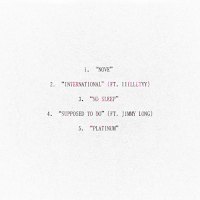