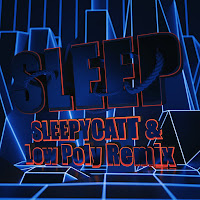 Canadian producer, Sleepycatt, and Floridian producer, Low Poly, took wavy trap and hip-hop infused track, "Sleep" originally by William Crooks, and merged it into a stomping bass club remix. There's nothing like hearing Sleepycatt's jersey club game and Low Poly supplying his bass house style merge together to bring a remix collaboration that shines atomic energy. Not only do they flip and manipulate the vocals in Crooks's "Sleep" but this duo's remix includes a spontaneous Lido sample as well. This is a buzzing new track to get your ears bouncing!

Below share and listen to Low Poly and Sleepycatt's remix of "Sleep"!