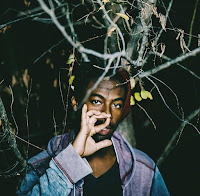 To be honest, there is nothing like hearing pure talent self-express new ideas and emotions. From Oklahoma City, Oklahoma, Hip-Hop/Rap artist lonemoon has been serving SoundCloud fervid self-written tracks embodying his assorted ways in making Hip-Hop music. He's able to rap about situations and emotions that he encounters in everyday life. Whether it's a collab or feature, lonemoon has the ability to exhibit light on his extraordinary mind on making music. Lonemoon releases mystic yet soulful hip-hop music using both of his skills in rapping and singing in projects such as his Apollo 18 EP or his latest solo release "Motivated." This modern poet is devoted to creating and manifesting music full of individual perspective and quality. Below take a read of lonemoon's Point of View Interview and get a know of the inspiration behind the creations.

Before I start. Thank you for having me. I love you guys at MELTING OF AGE.

Gospel, Music, Is, Amazing. Like, yo! I was raised with a bunch of gospel surrounding me - Donnie McClurkin, Kirk Franklin, most notably Fred Hammond - whose popping, contemporary, devastatingly melodic music is a total earworm for me. That's the shit that got me started. My father released a gospel project of his own, and with that came my introduction to Logic Pro 6 (I think it was??). I started playing around, making stupid rap songs about sandwiches and nuggets until I realized I could actually make some okay music. That was like, six years after I started.

In terms of pursuing music as a career, AWOLNATION, Skrillex, Deadmau5, and Kill The Noise were my CHIEF inspirations. When I listened to gospel music I thought people were just born straight into music and I couldn't get into it unless like... Illuminati stuff. Then, I learned the term "viral."

All of my music is a chronicle of the war in my head. I've been fighting dysphoria, depression, c-PTSD and life in general so basically, my music is the Book of Moon per se. I want people to go back through my work, start from my first album, and when they finish my discography, I want the listener to be like: "Whoa, they really changed. They really made a difference."

Music that I hear, and people. The person reading this is inspiring me right now.

It has GOT to be either "can't" or "brainless." They're both objectively sad songs, but they really helped me get through some SHIT! Haha.

I wanna become global with my music. I don't think I can ever become an ICON per se, but I want to have a big influence. My boy Zimbolt (love this dude. main man) and I were talking about this exact subject. He asked me the question, and I was like, "I wanna get like 1-3 million views on each music video." He said, "That's the kind of fame you need." I'm just running with that.