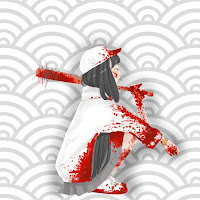 Naisu released a new mysterious track titled, "Traits," a song reflecting a short short story he wrote about a character named Mitsuko. Using vocals of Jaden Smith in Childish Gambino's "Late Night in Kauai," Naisu gave us a dark and captivating piece of art, exposing Mitsuko's personality and character in more depth. From Naisu's narrative of this young and courageous girl to the intriguing artwork done by @aiodraws, this project really came together nicely, displaying the limitless artist he is. Below, check out the Artist Q&A I had with Naisu, talking all about his new track. Enjoy!

Read the story of Mitsuko in the description here.
Also, "Traits" is available for download here!

1. What was the inspiration behind the track, "Traits" and the character of the story, Mitsuko?

The inspiration for Traits came from few places. It came from the spirit of Halloween, from feeling pressured to grind while streaming, and from my desire to push small artists like myself. More personally, it was an expression of the way I felt while writing it. If you've ever seen a movie called Battle Royale, the girl is inspired by "Mitsuko" from the movie, only in her actions and name. This story's Mitsuko is a manifestation of many negative traits taking their toll on a once innocent girl, driving her to the point of insanity.

2. Why did you choose to sample Childish Gambino's "Late Night in Kauai" for this mini project?

I found a pack on Reddit of complete vocal tracks from his albums Because The Internet and Kauai. The part with Jaden's vocals sounded really clean and fit with the vibe of the track so perfectly. Once I tried it, I couldn't hear the track any other way. Plus, I'm a huge fan of Jaden's work!

3. How would you describe your experience as an artist when it came to producing the song and writing the story of Mitsuko?

When I first started the track, I was streaming on Twitch and wanted to make a Halloween themed track. It all sort of came together from there. When I'm able to latch onto an idea or feeling, I can zone out for a few hours and come out with a track. From there, it's all fine tuning and working on the release.
I got a Skype call with my friend Karla, and we started talking about concepts for the cover art. She took our conversation and the song with her for a couple days and came back to me with the sickest cover art I've ever seen. Once I saw the girl on the cover, I decided to give her a name and a story relating back to what the song is all about. I really love the way everything came full circle with the song, character, and story.

4. What do you hope listeners/readers will take away from "Traits" and the short story?

My hope is that people really take the time to understand what this track is all about. If you take the time to read the story, it adds a whole new dimension to the track. I hope people can feel what I felt I when making this track, all of the emotions behind every sound. In some ways, Mitsuko and I aren't so different.