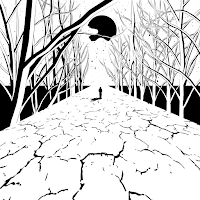 In Foxful’s LP, BAD DIMENSION,  we are greeted with a melancholy tone and vibrance. This album begins a new form of Foxful. A deep smooth melancholy sound. the snappy snares with warm basses create and solidify the rhythm while the bright synths jump on top. We have a lot to look forward to from Foxful and this is just the beginning of a new sound.
Below share and listen to Foxful's new album, BAD DIMENSION!


1) What other forms of entertainment or art inspired you to create this album?

While making the album I drew a lot of inspiration from cinematic work such as Stranger Things, Hannibal the television series, The Twilight Zone and defiantly the anime Steins;Gate as well. Video games like The Legend of Zelda and Skyrim also had some influence.

2) What was the creative process like when creating this album?

Well. I came up this the idea for this album almost exactly one year ago now and it even has melodies that are over two years old. I made a few songs that reflected how I truly felt at the time and it resulted in a handful of tracks that sounded very different than what I usually make. I decided to continue with the idea and the rest came naturally after that.

3) What track do you feel describes the story of this album the best?

Paralysis because of its dark, ominous sound but very light and heartfelt piano ending. To me, this symbolizes making the most of the bad situations, which describes the story of the album really well.

I think this album represents the next step for me musically. I plan to continue moving forward with this new sound and style, but that doesn't mean I'll stop making fun, energetic tracks like "Sky City" and "Ramune". My goal is and always will be to make meaningful music that I hope will enlighten and inspire all listeners.