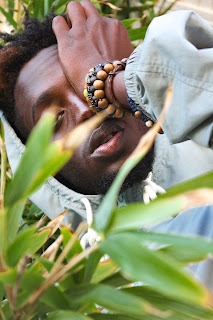 "One in a million." A platitude and cheesy phrase but I use it now because there are just some artists that are truly one in a million.The delicate harmonies and soulful bliss spill from New Jersey's Ehiorobo and it is just what the music scene needs. His voice caresses your soul, and the jazzy sounds lift your emotions to see the brighter side of life. Ehiorobo has been capturing the ears of many with playful projects like his album Limeade, released on DESKPOP, or the multiple releases like "Glideroy Lockhart" or collab with Bohkeh "Happy Place"! The use of lively pianos matched with drums and various ringing instruments give his music diversity in style and an eclectic sound. He glides his voice and smoothly speaks about love, life, youth, and the enjoyment he finds in experiencing it. Just finished wrapping up his latest tour with Moonbounce, we can't wait to see where Ehiorobo will take his exciting musical journey! Below check out the interview with the wondrous artist, Ehiorobo, to see what and where his inspirations for his mesmerizing music comes from! Enjoy!

Ok, the real for real answer is when I was around 8 years old, I came home from school and saw the talent show episode of That's So Raven, where Eddie starts rapping in the basketball gym with his friends, and I thought the organization & energy of it all was super alluring. Just looked super fun to be moving & emoting so much at the same time. Top notch poise & styles lol. That night, I wrote my 1st rap ever hahaha. The quality of it is unimportant, but I'm glad I did it

Beyond that, I have an older brother who would always introduce me to new music, films, ideas, etc. He's 6 years older than me, so when I was like 12, he was a freshman in college. He'd rap with his friends and organize mixtapes, releases, and stuff and would ask me to hop on songs with him & others (which always got me psyched). Looking back on it, it was super sweet of him to include me like that lol. Most of it sounds goofy now but was still a warm moment. By that time, I was recording & putting out songs on a USB mic I had in my bedroom, learning how to use FL studio and stuff. I went by a different name, and there's a whooole bunch of stuff on YouTube. A few years later when I was around 16 or 17, I decided to try singing out because I was getting really into N.E.R.D. & Pharrell.

I like people that enjoy what they enjoy boldly. I know that sounds cliche or whatever, but it's especially dope when it's something I know nothing about. Like some type of horror film rabbit hole from a director that I have no clue exists or something. Being put on to some new new by someone who's emotionally invested in it from a spectator standpoint is always sick. Those people are most intriguing to me I think. Overall I think it's beautiful to be involved in a deep fandom of something. The people that inspired me to pursue music were people who make really left field stuff without relying on some type of instrumental prowess. Like, two artists can play the same four-bar chord progression, but the one who plays it like it's coming outta their body is the one I wanna pay attention to. Also, I love the idea of a really skilled hobbyist. Someone who just does stuff because it makes them feel good, whether it be gardening, or taking photos, etc.

I'd call it somewhere between wonky r&b & art rap. It's pulling a bit from r&b + jazz + video game music + indie rock sometimes, but it's whimsical for sure lol. It kind of sounds a bit like falling for someone inside of Willy Wonka's Chocolate Factory occasionally. It's also somewhat a reflection of myself, and humans aren't in romance mode 24/7, so there are always some other themes in there. Also, I like vocal narratives that sound like someone's pondering & reflecting, like a big monolog. I also dig vocals that feel like someone's revolting against something.

Question 4: What influences your style of work? Both lyrically and instrumentally.

There's a bunch of artists that I'm a huge fanboy for. Some people I would pull lots of inspo from are Jesse Boykins III, Milo, Open Mike Eagle, Sampha, Bo en, Janelle Monae, Jamie Lidell, and way more. 2 years ago I would say that most of the inspiration for my music comes from cartoons, movies, or whatever, but after really thinkin' about it, it's interpersonal relationships. Friendships and really intimate moments I have with people. I was dating this girl for a long while, and one night she led me to this random ass tree house a few neighborhoods away from her place. She was wearing a white sun dress, and the moon was super huge. I tried to get on the swing installed on the tree house and slipped on my ass haha. Both of us were laughing super hard. Just thinking about that moment, there's a bunch of different sounds I can associate with it & would wanna to put together. Kinda like scoring a movie that doesn't exist, only because it helps you remember shit you don't wanna forget. Yes that sounds cheesy as shit but it's the truth lol.

Question 5: What is your favorite track that you have made so far?

There's a good handful of my songs that I feel especially good about. To be honest, I kinda freak out if something I work on comes out and I'm not 100% into it, so I can comfortably say I'm down with everything that's out and has my name on it haha. And if I felt like that in the past about that thing, I like to respect my older judgment enough to let it live. But yeah the song that I'm most proud of is "heir to the sugar honey queen." For me, that song sounds like kindergartners having a crush on each other, although it still feels a bit grown somehow lol. I also like "Truck" & "Glide" a lot, which are two songs I did with my mans Flamingosis. Also, this song I did called "Gilderoy Lockhart" always makes me feel good about my internal processes whenever I play it. Feels super meta somehow to play that one at shows.

I really wanna focus on doing things that feel interesting to me, especially with my tuneage. I'm graduating school in May, and I feel like I've almost been too active with my tunes throughout my time in classes, but I'm glad I have been haha. Feels right. Gonna feel really good to have even more time on top of the time I've been trying to make for myself though. Anyway, I just wanna feel really excited about the things I'm working on & putting energy towards. I have an EP with Flamingosis coming sometime mid-this year, and a new album hopefully by the end of 2017. If I can make more stuff & fine tune the live show into a more cohesive, top notch, and special experience, then I'll deliver it to wherever it belongs. If that space happens to be festivals next year, then so be it haha. I like to think more about the process than the end goal though, just feels more healthy to me. Also, I'd like to create some type of large scale concert event experience for marginalized kids that feel isolated from the art shit they like. Also, make some more clothes. Maybe make an egg sandwich recipe book.

Making anything at all with Janelle Monae would be really sick. I don't care if it's a peanut butter jelly sandwich. I feel like we'd be super good friends. I was cleaning my room yesterday and found a portrait I drew of her for my senior year high school art class hahah. Anyway, The ArchAndroid is an incredible album, and anyone reading this should listen to it right now. Ok yes thanks.