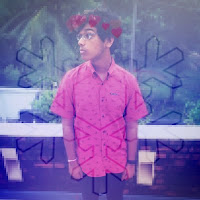 From the state of Minnesota, producer Yitaku is making some of the richest and vibrant music you will hear within this generation's upcoming electronic music scene. Resting within the collectives and labels, Paper Crane and Sola, every release captures an emotional and kindred sound. In 2016 Yitaku released a heart endeavoring EP titled, Ultraviolet, which caught the attention of many with it's radiantly composed and orchestrated tracks. In addition, his remix of k?d's "Discover" and recent release with Holly and K the Infinite, "Rock Bottom," the forward-thinking producer continues to surprise listeners as he branches his talent into diverse styles of electronic music. For our 50th Point of View Interview, we gladly present Yitaku's mind on music and his inspirations! Enjoy!

Okay, so this is gonna be kind of a long rambly story lmao.  When I was 4 I started taking piano lessons, and I guess that's where I got my start with music but I knew nothing about composition and production or anything like that for the next 9 years of my life.

When I was like 11 or something, my parents got me a DSi (I had a DS lite since like forever, but like most DS Lite's it snapped in half LOL)  for my birthday, and as a result, I was super invested in Flipnote Hatena.  I guess I realized then that I wanted to make any form of art.  Over time as this app died down, I moved to YouTube to make "let's play" videos (lol), and although the commentary was awful, I am still super proud of how well I could do video editing back then.  Through Youtube, I found Skrillex, Monstercat, and The Glitch Mob a while back as well. I was a huge fan of electronic music since.  About a year after finding them I decided to learn how to make it myself and 3 and a half years later here we are.

I LOVE M.I.A.  As a Sri Lankan; there aren't really too many of us in the music industry at all.  M.I.A being Sri Lankan but also a woman is so inspiring to me.  She definitely gave me some courage that if I work hard enough, anything is possible.  While she is not exactly a musical influence for me (although I love her music) I take a lot of inspiration from her to keep going.
Bon Iver has also been a huge inspiration for me as well.  The northern Midwest hasn't always been known as the most exciting place for finding talented artists, but I believe Bon Iver was one of the first to put us on the map.  I'm also extremely in love with his music and even as a kid, I wanted to make music just like his.  If you ask my friends at school, they can testify that during my free time I often study his music to scrutinizing detail haha.

Another person who inspired me to make music was Owl City.  I was so infatuated with his music as an 8-year-old and it followed me for a long time - I can adamantly say that his music was the soundtrack of my childhood.  I currently live in southern Minnesota (after moving here from Brooklyn, NY), and I'm 99% sure I'm the only person who even makes electronic music where I live.  Learning that Owl City lived only 45 minutes from where I currently live was a huge motivator that told me that maybe I could actually manage to take my music outside of here.

Damn this is kind of harder than I thought it would be lmao.  Like pretty much every artist. I make what I enjoy hearing the most.  I honestly love huge, breathtaking music more than anything else in the world.  What I try to do with my music is combine beautiful atmospheres with really powerful drums and melodies and bass. Typing this out has proven to be super difficult because I know what /I/ want to do. It's strangely difficult because I usually just run with an idea I have but I never really start a song with a set vision for it.

I try to take inspiration from as much as I can.  In terms of musical influences, I'm super inspired by M83, Bon Iver, Madeon, Stumbleine, Sorrow, The Glitch Mob, and Porter Robinson to name a few.  I take a lot of inspiration from nature as well - my Ultraviolet EP was almost completely inspired by nature.  The Pokemon OST's also really made me fall in love with music as a kid.  I could seriously go on and on about different things that I take inspiration from but yeah these are the big ones!!

As of right now, it's probably my remix of "Wings" by ARMNHMR & Element.  The second drop was a style I have always wanted to pull off, and this was the first time it turned out exactly how I wanted it to.  Since I released that song, I've been working really hard to build off what I did on it.  There's also an original I'm working on named "Tears" which I love very much and while it's not finished yet, I know it will be my best when it is.  It is very close to my heart, and I actually wrote it as a result of regret/anger towards a person and general frustration.

Question 6: How far do you plan to take your music, any goals in mind?

Honestly, I just want to be able never to stop making music.  I don't see myself stopping anytime soon.  Since I'm still in high school, I'm pretty unsure of where my life is going to go, but I would love to do this as my job one day.  As of right now, I've only played one show but this summer there's so much being planned right now and I'm extremely excited and also terrified lmao.  I just need to keep telling myself to keep going because sometimes I get so stressed out about what is going to/could happen but I really need just to make the most of my situation right now, because of time and time again, I find myself trying to backtrack.