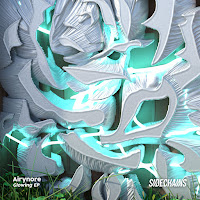 Entering slowly into a ray of vibrant energy and in the horizon is a sound that evolves seamlessly by the second. You've been listening to Airynore's new EP this whole time but got so caught up in the abyss of beautifully intricate rhythms that you kind of just lost your self...in a good way. Embrace the slow downed beats of Airynore's club inspired EP, Glowing, recently released off of internet label, SIDECHAINS. Consisting of three flawlessly executed tracks, this Bay Area producer introduces to us his new direction of creating club-esqu music. Each track is formulated to bring the new ideas of what he wants to provide, like whimsical drum work, eccentric bass, and bendy vocals.
Below check out the Arist Q&A with Airynore all about his new EP, Glowing! Enjoy!

What was the inspiration behind Glowing?

Basically, this EP was inspired by the various styles of "club" music that I've been getting into lately. I wanted to start making more "club" influenced tracks while still maintaining the familiar motifs/sounds of my previously released music. Over the past year playing shows, I've been experimenting with the types of songs I would play. Over time it became a set of purely club music, instead of the weird, convoluted mix of pop, SC "trap" and other weird future bass stuff that I honestly was never really into.

Can you explain the concept behind the EP?

There wasn't really a concept for it at first. I was just making a bunch of tracks throughout 2016. However, I was a huge fan of the homies over at SIDECHAINS and had been planning to send them stuff for a LONG time. So I picked like 5 or 6 tracks that I felt would fit them and sent it over, which eventually led to this EP. BTW, a huge shout out to Denzel and the SIDECHAINS fam, he updated me constantly on all the usual logistics that releasing music entails and made the overall process super easy. They're very supportive of me so I can't thank them enough and hopefully, I can go over to Australia to visit them soon ;)) hahaha.

Do you have a favorite track? Why or why not?

I'm weird in that I'm very black or white in terms of whether or not I like a track that I've made--either I really like it, or really don't. I guess that's due to the fact that I over think things sometimes and am a little bit of a perfectionist when I work on stuff. It can usually go both ways if I spend too much time on a song, either I'm really content with how it comes out, or I never become satisfied with it and eventually despise it.

That being said, I think it's easier for me to choose what aspects of each song that I like off this EP rather than to play favorites. I really like the melody on "Glowing," it's simple but catchy to me. I also really like the vocal chops and chord progression on "No More Lies." As for "Without U," I like how the sub bass during the drop turned out, as well the little teasing sub bass throughout the song.

In what direction, would you say Glowing is taking you as an artist or, in other words, what do you hope listeners will take away when listening to the EP?

Not only do I consider this a transitional EP to a more "club" influenced the sound, but also towards a more subtle and softer style, as I kinda want to distance myself from the more "future bass," over-the-top sound that my music tends to portray and be pigeonholed to, haha. It's a sound that I've become more and more disinterested in and in a way, kind of misrepresents what I want this whole Airynore project to be. I wouldn't consider this to be going towards a more serious sound or direction, but rather just a less exaggerated and more understated approach, which I believe reflects my personality a bit better. And hopefully, it shows in this EP.