PEOPLE IN YOUR LIFE ARE SEASONS 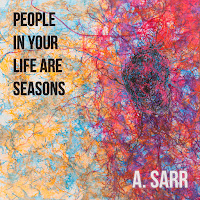 After waiting quite some time, A. Sarr officially released his first debut album titled, People in Your Life Are Seasons! From his life inspired lyrics to the drifting and beautiful indie electronic instrumentals, the album surrounds you with A. Sarr's heartfelt emotion and inspiration. The album also features other artists like Russell Elliot on the track "...to Love" and Tirman Kid in "Hangover Curse," giving variety to A. Sarr's latest project. The album is a poem about life experiences in love and surviving the trials that are encountered. It's motivational, relatable, and highly recommended if you want something unique and out of the box!

Below check out the Artist Q&A with A. Sarr as we talk about his newest creation! Enjoy.

People in Your Life Are Seasons is available for purchase here!

What inspired the album as a whole?

This album was inspired by a lot of things, but it really all boils down to one moment. I started working on it two years ago, while I was in the hospital. All I had with me was an Ableton trial and whatever was in my iTunes library at the time. From there I started working on the song that would eventually become "Praying Hands". Before then I had spent my whole career playing in bands for other people. Which was fun and showed me parts of the world I’d never seen before, but it was never my own. I set out to make a batch of songs that was me, something I would be proud of thirty years from now. We’ll see if that stands to rest, but as of now, I couldn’t be happier!

How about your lyrics?

I try really hard lyrically. I never cared for lyrics that are too esoteric and over people's heads, so more than anything I want them all to be relatable on the first listen. Every line in the album is something I’ve experienced before. "Moonlight Bae" really is about my one-sided love affair with the moon, and I really do have a book full of poems I made when I was hungover.

What are your favorite tracks from People In Your Life Are Seasons and why?

This is hard! They’re all my little bb’s in their own way. "Gang Gang" is my favorite musically, because it hits this great middle-ground between highbrow music and lowbrow lyrics. "How We Sleep" is always ridiculously fun live. "Bottle Blondes" is everyone’s favorite song, even though I think it’s the saddest song ever to exist. They’re all special, and I could never choose a favorite kid.

In what direction do you feel your debut album will take your music career?

It’s moving forward already! I love having this out so now people could know what it is I actually do and love. My image was really inconsistent before, and my shows would be a success, but no one would ever really know what I did. Now I have a body of work that represents me, and that alone is exciting. Also the travel and collab opportunities, I’m playing SXSW in March and am touring all throughout 2017. I’m not someone who relaxes very well, so there’s always bigger and better things in the future!