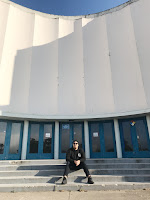 In the crowded and ample city of Los Angeles, there hide countless talents that are waiting to be noticed. It isn't difficult to find artists in LA, but crossing paths with those who constantly push their work are rare. Slow Graffiti, a resident of California's busiest city, happens to be exactly one of those passionate creators. Docking in club productions, Slow Graffiti has caught the ears of many media platforms like BBC Radio 1, Beats Radio, Team Supreme, and plenty more. From chaotic bass tracks to minimal classic club pieces, you can find releases from this LA producer on labels such as Beadsqueak Squad, Jadu Dala, Too Lush, or his recent track "Birds" on Prime Night Cult. With three igniting EPs and numerous collaborations, Slow Graffiti certainly does not "slow" down in pumping out music for the world to enjoy. Founder of Home Records, Slow also paves the way for underground producers through his internet label that offers music from artists who also experiment with the various styles of electronic bass sound. Today, check out our interview with Slow Graffiti and see the direction and inspiration of his music along with an epic guest mix! Enjoy!

I have grown up around music my whole life, at a young age, my mother would play a ton of records in the house, mostly Spanish and oldie records. As I got a little older, I got my first guitar and really got into Punk Rock and started playing in bands throughout high school.

When my musical tastes started to shift again, I got into all facets of dance music which eventually led me to producing. Things began to accelerate when I was introduced to Boys Noize’s record "Oi Oi Oi,” this record really resonated with me, so much so that I really wanted to produce and DJ. I started working on my productions and then started to DJ once I had an enough music to play out.

Bjork is definitely an artist that inspires me. She's been pushing boundaries since the late 80’s and continues to be an innovator of sounds today. When I first heard her album,"Debut," it was nothing I had heard before--so joyful and soulful with great production that felt like nothing during that time. One of my dreams is work with her, sit in a studio and watch the process of working on an album, start to finish. That is something I always dreamed about as one of my main music goals.

Hudson Mohawke is another artist that inspires me, from his work with Lunice on TNGHT to his work on Yeezus. His signature kicks and snares are ever present with any production he touches. His style is raw, aggressive, and very straight ahead."Chimes" is still to this day, one of my favorite songs. His production style has a tendency of saying a lot without too much excess, not a lot of synth work; drums are the main center point--which influences my sound a lot since I focus a lot on drums.


Question 3: How would you define your style of music?

I always find myself looking for the right answer to this question, and the best explanation I have come up with is the term Club music. I started my career making electro, then got into making trap for a couple of years, and then from there, I started expanding my sound into other genres that landed me where I’m at currently. I take a lot of influences of music I love and combine them together. A recent example of that would be my track titled "Bells." "Bells" dip in many different elements of dance music but have more of a feel that would fit on an album, this track was really my first attempt at songwriting.

Question 4: Could you give us an idea of how your creative process starts for a song or project?

Most of my songs start with the drums-- I love drum sounds, percussive sounds, which is why most of my songs have a heavy drum driven sound to them. But with "Bells" and my remix of "Neon City," I started with the piano melody first and then built the song around that theme, this gave both of those tracks more of an organic feeling. When I work with other producers on a track, I tend to hone in on a particular sound, whether it’s a drum pattern, vocals, or a melody pattern. From that point, I build around the main theme and start bouncing ideas back and forth till the project gets completed.

Picking one is so hard. If you would’ve asked me this question a year ago I would’ve said my track "Koyoto" I did in 2014, I worked on the track with fellow producer Scruloose from London. But currently, I would say my track "Bells," I love everything about this song, the melody, the drums, the way the last piano key fades out. Besides being my favorite produced track, this track holds a special significance in my life.

This year has been amazing, lots of projects that I have been a part of and amazing opportunities to work with great people. I’m looking forward to the rest of the year, and I have a couple of singles to finish up, two official remixes dropping in the next couple of weeks and excited to start on my next EP.

I would love to work with more vocalists, I had a chance to work with Cakes Da Killa and TT The Artist this past year, so I'd love to continue working with people in that realm. UNiiQU3 is an artist I have been wanting to work with for a long time--her sheer rawness and energy that she puts in her tracks. Danny Brown is also on my artist wish list to work with, I respect his vision for taking risks and pushing boundaries in hip hop. I would also love to work with more producers, primarily producers from completely different genres to expand my mindset as a producer.