BECAUSE 10 IS JUST NOT ENOUGH 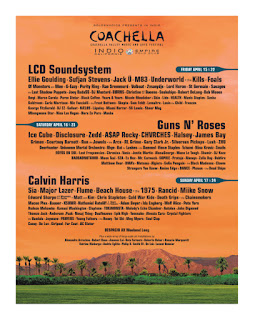 Last year I did a review on Coachella's 2015 lineup, which was pretty impressive considering the artists on there, have grown immensely as of today. What's different, for me personally, from this year's to last's is that I am actually attending my very first Coachella. Now this is my very first Coachella, but not my first festival, or 3-day festival to narrow it down. For the past 3 years, attending festivals is something I consider special to me. It’s one of the only places where you can be surrounded by different artists with different musical styles at one time and California's Coachella Music Festival is one event that brings those words to justice. After reading the reactions and comments on various social media platforms, many are bittersweet about the lineup. Some say it’s too boring while others say it’s one of the best lineups Coachella has had in a few years. With headliners being Guns N’ Roses, LCD Soundsystem, and Calvin Harris, Coachella can be considered solid. I believe this year has the perfect lineup for those who have never been to Coachella before or maybe even a big festival. Having electronic, pop, rap, hip-hop, indie, and alternative rock music genres, you are able to go to Coachella with seeing at least more than a few of your favorite artists. My only complaint is that this year's lineup could have stepped up their band game a little more. Last year, there were more electronic artists than there were bands. This year I feel as though there are enough bands but just not enough of the good ones. Many are very mellow tempo and have electronic substances, but maybe that's just because the generations are changing their definition when it comes to the meaning of "bands." I think that if Coachella wanted more electronic based artists, they should have replaced them with more eclectic DJs/artists. For instance, Branchez, Bonobo, Jai Wolf, Santigold, or Yseult could have been incorporated on this year’s lineup. Speaking of replacement, many argue that Calvin Harris is not headliner material, or at least not for Coachella. For those who say this, I agree with you. For EDC or Ultra? Yes. But for a festival like Coachella, Harris wouldn't be my first choice. I've seen the DJ twice and being a headliner for a massive festival, he'll just play what you hear on the radio or at least what's on the ITunes’s Top 10 Dance Chart. But with not much intense complaint, I am looking forward to many artists this year. Many in which I have never seen before and some that I have. This year at Coachella, I wish to re-witness some sets that I immensely enjoyed from the past but to also see other artists I haven’t seen tear up the stage. Since 10 are just not simply enough for list of my top attendees, there were just some I just couldn't leave out. Below is My Top 11 Coachella Attendees for 2016 List!